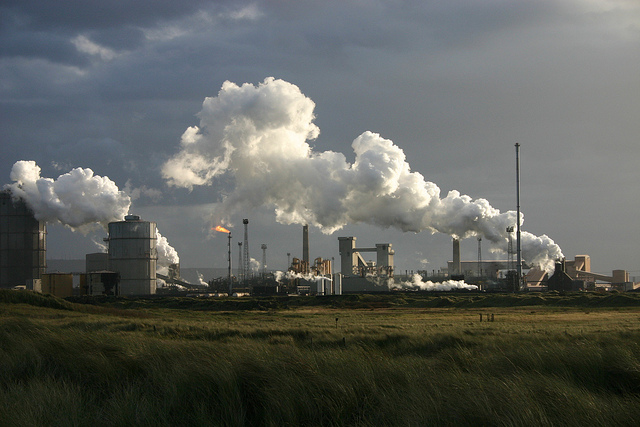 Humans: Air borne organic materials such as a spores, bacteria, fungi etc, produce allergic reactions, bronchial asthma, emphysema, tuberculosis and smog causes’ bronchitis, and asthma and lungs diseases. Cotton dust causes lung fibrosis. Sulphur Dioxide causes drawing of mouth, sore throat and eye irritation. PAN causes irritation of eyes and throat and respiratory diseases (bronchitis, lung cancer).
Animals: Domestic animals are also affected by the air pollutants. Ingestion of fluorine compounds deposited from the air on fodder causes fluorsis.
Plants: Sulphur Dioxide causes chlorosis, plasmolysis metabolic inhibition and death of plants. It does a great harm to forest trees. PAN and Fluorides is damage leafy vegetables. Ozone causes premature yellowing and all of leaves and flower buds. Dust, smog and smoke reduced sunlight and form thin layer on the leaves, thereby retarding photosynthesis. Air pollution Kills Lichens: Death of Lichens is a sure indicator of air pollution.
Materials: Acid rain and photo chemical oxidants adversely affect buildings, metals, clothes, paper and marbles. Many industrial units have been shifted to save the precious marble monument, the Taj Mahal at Agra.
Climate change: Carbon dioxide content of the year is increasing due to deforestation and combustion in industries, automobiles and planes. Increase in carbon dioxide may cause rise in atmospheric temperature producing Green House Effect. Arise of global temperature by more than 2 and 3 degree many melt Glaciers and polar ice. This will cause rise in Ocean level and consequent flooding of coastal towns and submersion of Iceland’s. Aerosols the Ozone layer in the stratosphere. Thinning of ozone layer would permit mere of the harmful ultraviolet rays to reach the Earth. This may cause Sunburn blindness and installation of proteins RNA, DNA and plant pigments.
Control of Air Pollution: Air Pollution is a big problem of present society. It because become necessary to make special as well as legislative measures to protect the environment. Three types of stets can be taken to control air pollution: a) Separation of pollutants from harmful gas. B) Avoidance of pollutants. C) Conversion of pollutants to harmless material.
Separations of Pollutants: a) Trees should be grown in large numbers. B) Trees use carbon dioxide and release oxygen. c) Good quality of food should be used in motor vehicles. The exhaust gases from motor vehicles may be cleaned by use the catalyst. D) The current industrial processes may be suitably modified so as to reduce or check air pollution. E) The use of tall chimneys in factories can be reducing pollution of air at ground level. F) Mining area should be afforested.
Avoidance of Pollutants: a) Conversational Fuels should be replaced by electricity and natural gas. B) Nuclear explosion should be stopped. C) Use of high temperature incinerators can reduce the production of ash. D) Pollution free fuels should be developed for automobiles. E) Complete electrification of rail track will greatly reduced air pollutants.
Conversion of Pollutants: This may be done by oxidation in the air or by chemical neutralization of acids and bases.
Ozone Hole: United State government in 1978 banned the use of CFCs’ aerosols. British scientist reported as Ozone hole over Antarctica in 1985. Environment committee in 1988 given a comprehensive report which indicated the depletion of Ozone layer over Antarctica had occurred between August and October each year since late 1970s.
The first Global conference on the depletion of Ozone layer was held in Viena (Australia) in 1985, British term discovered a hole in Ozone Layer has a large as that of the United States. This was followed while Montreal Protocol in 1987 which called for a 50% cut in use of CFC’s by 1980-reducing to the level of 1986. Many countries including India did not see any rationale as its release of CFC in just 6,000 tons a year, equivalent to one and half days of world total. In the country, per capita consumption of CFC is 0.02 kg against one kilogram of Development country. CFS’s are mainly the problem of development world as 95% of CFCs is released by European countries, U.S.A., US.S.R. And Japan.
India has three Metropolitan centers, Delhi, Mumbai and Kolkata, the largest organ producing cities. Major pollutants responsible for this depletion are chlorofluorocarbon (CFC), Nitrogen oxide (from fertilizers) and hydrocarbon. CFC is widely used as coolants in the air conditioners and refrigerators, aerosol propellants and in form insulation. The Supersonic aircraft flying at stratosphere Heights cause major disturbance in oxygen levels. The threat of oxygen is mainly from CFCs which are known to deplete oxygen by 14% at the current emission rate. On the other, Nitrogen dioxide produces oxygen by 3.5%. Depletion of oxygen would lead to serious temperature changes as the Earth and consequent damage to life support system. The reduction in Ozone Layer would lead to temperature changes and rainfall failure by 2%. Cancer is the best established threat to man. Depletion in Ozone Layer causes Cancer of skin like melanoma. The Other disorders cataracts, destruction of a aquatic life and vegetation and loss of immunity.
Design by Mohit Bhardwaj

What is the Meaning of Unix/Xenix Operating System?