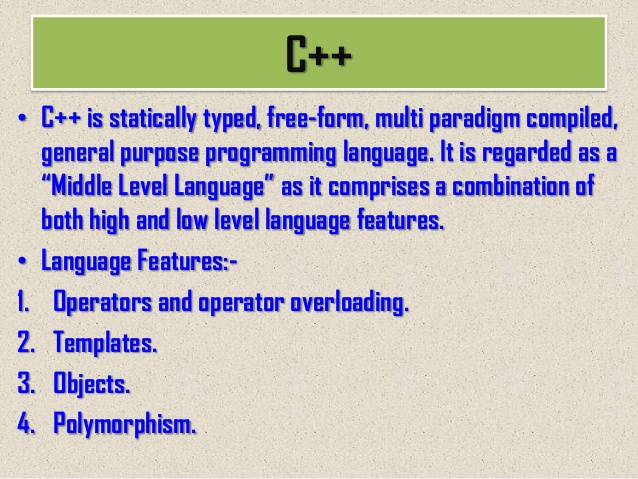 Basics of c++: In this we will study about the basics of c++. It will include the syntax, variable  , operators loop, types, pointers,  references  and information about other requirements of a c++  program. You will come across lot of terms that you have already studied in c language. C++ program can be developed from a general structure as described below. A c++ program a structure is made up of various sections like documentation. These all are discussed as bellow:-

1.       Documentation section.
2.       Pre-processer directives or compiler direction or c++ pre-processer.
(a) Link section
(b)Definition section
3.  Global declaration section.
4. Main c++ program function called void main()
5. Beginning of the program by using {
(a) Local declaration or local variable declaration.
(b) Excuation part or Executable statement.
6.  End the main program using }
7. Sub-program section having using user-defined function.
Function 1()
{
User defined program or body of the function sub program
}
Function2()
{
Another user defined sub program
}
Let us discuss in details as below:-
1.    Documentation section:-
In documentation section we give a comment statement. There comments statement is a non-executable statement. Comments can be stared by using “||” for the using of single statement comments. But if a comment having more then one statement across.
The genral syntax is :-
//Text line or message line.
Or
/* COMMENTS text line*/
2.    Pre-processor directives or link section:-
These are compiler pre-processor statements. These are also optioned statements but become compulsory if your compiler has INCLUDE and LIB sub-directories.
(a) Link section
In link section we link the compiler in build function like cin>>, cout<<, &grt(), Fmod(), sleep(), clrscr(), etc. with include sub-directory’s header files like iostream.h, conio.h, moth.h, dos.h etc.
(b)Symbolic constant and # define statement
Symbolic constant is a name substituted for a variable.Its value can not be changed during the execution of te program. Symbolic constant are also called c++ program of c++ pre-processor. Another definition of c++ symbolic constant is compiler directives because these constnt gives a direction to the compiler for assigning a constant value to a variable.
3.  &nbs
p; Global declaration section:-
In some programs we use function sub-program. So  we want to declare some variable in the main program as well as in the function sub-program having same name.This is the duplicate in defining the variables.
This can be done as:-
Data types v1, v2,v3,……………………….vn;
Where data-types are int, float, char, double etc.
4.    Main() program section:–
Main () function act as a container for c++ programs. The various input/output as well as processing statement are include in the main()function.Void main() functionor program is the c++ programs main structure in which we process some statements.
Its defines as:-
Main()
Or
void main()
5.    Beginning of the body of the main program:-
The beginging of the main program can be clear by using curly bracket “{”.
(a) Local variable declearation:-
Variable which are used in the main program are declared by using the variable declaration statement.
(b) Executable statement:-
This section has reading, weitting and processing statements having input/output function.
6.    Ending of the body of the main program:-
By using the bracket “}”. We can end the main program in c++ language.
7.    User defined function section:-
In this section , we define the function are called program which are called by a calling statements from the main program. Further, in this section every function sub-program has a local declaration variables section section and executables statement section similar to main program.
(1). #include<iostream.h>
}||pre-processor directive
#include<conio.h>
(2).  int a,b,c
}Global  variables
float x,y,z
etc.
Shopping for Boobs Online Just Click Below

Energy Scenario in India 2016 and Conventional Sources of Energy