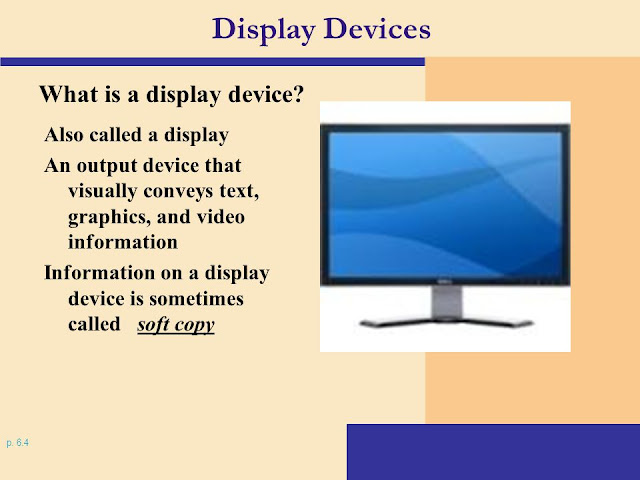 Soft Copy Devices: These are those devices whose output is usually not visible directly but can ne viewed with help of computer where one can update data, change data and do various other operations on the data. Some of the most commonly used soft copy output devices are:

Visual Display Terminal: This is the most popular of all soft copy output devices, which is used to display data so that one can modify the data as well view the results of processing. The monitor and keyboard together make up a “terminal”. The terminal usually combines both input and output functions, the terminals are usually categorized into the following three categories:
Dumb Terminal: The Dumb terminal is a terminal which has a keyboard and monitor but without in-built memory, therefore it can only handle input or output functions, but cannot processes the data. These are just used for the purpose of input and output of data. The processing is done at server to which this terminal is connected.
Smart Terminal: It is the terminal which is provided with a microprocessor chip for doing various arithmetic logic and control functions. These terminals are also provided with internal storage. They are capable to move cursor, control its movements, add, change or delete the data. These terminals can store and consolidate data prior to sending them for processing. These terminals usually cannot be programmed by users.
Intelligent Terminal: This terminal has built in micro processors which can be programmed by the users, along with visual display terminal. These terminals are capable to process small jobs without the help of the server. These terminals come with circuits that make it feasible to communicate with other terminals and processors.
Monitors i.e. VDU (Visual Display Unit): This is a television like device, which is used to display information, output and input data. The resolution is the measure of the quality of the monitor, which inturn is measure of pixels a screen contains. A pixel can be understood as the smallest part of the screen that can be controlled individually. The more the number of pixels, the more is the clarity and quality iof the image. The screen of monitor is of generally two types:

Cathode Ray Tube (CRT): This screen is generally used in desk top computers and many pc models. This works by using beam of electrons which move and trace regular pattern of horizontal lines on the phosphorous coating on the screen’s surface. The images on the screen are produced by varying the intensity of the electrons bean. The bean scans the total screens many times each second. These screens are capable of producing monochrome or color images depending upon the number of electron gun used. The CRT screen can display upto 25 lines of 80 characters each. CRT is quite reliable but is bulky, occupies more space as well consumes more power, making it difficult to transport the computer.
Flat-Panel Display: This is like the display in digital watches and calculators where Liquid Crystal Display (LCD) is used. Here there is a flat panel and does not have a picture tube. It works on the principle that when high voltage is applied, the crystals line up in such a way that it blocks the light passing through them and in absence of light is seen as the characters on the screens. These LCD panels are a lot better than CRTs as they do not flicker and cause strain to the eyes.
Connecting various peripheral Devices
All the above peripheral Devices both input and output devices have to be connected to CPU in order to make them work. This connection is done using special hardware called “interface”. There are two standards for interface which have emerged over years. They are:

Energy Scenario in India 2016 and Conventional Sources of Energy