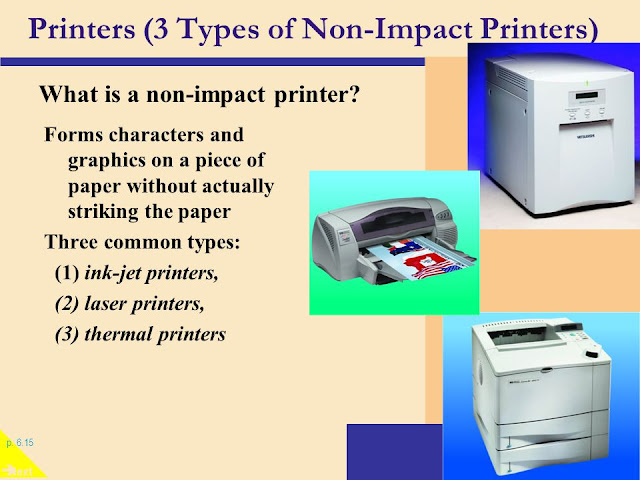 Non- impact Printers: As already discussed these are the printers which print without any direct mechanical contact between the head of the printer and paper. The most commonly used categories of non impact printers are:
Thermal, Inkjet, laser, Electrographic, electro static
Thermal Printer: This printer uses heat sensitive paper in dot matrix method, on which hot needles are pressed to form characters. This is the variation of the impact dot matrix printer but this makes very slow or little noise. This printer’s basic disadvantages are it uses special type of paper and it is not possible to print multiple copies simultaneously.
Inkjet Printer: This is an expensive but faster printing device. But when the volume of print is large the cost comes nearly equal to line printer. This printer uses a mechanism where it sprays ink from tiny nozzles through an electric field that arranges charged particles ink into characters. The paper absorbs the ink and it dries instantaneously. It is capable to print about 500 characters per second. We can also have color printing, by using ink of various colors. This type of printers are very reliable.
Laser Printer: When cost is not the criteria, when quality is important, then the most suitable printer is a laser printer. These type of printers use laser beams which charge the drum negatively, to which black toner powder which is positively charged is sticked. When the paper rolls by the drum, the toner powder is transferred to the paper. These printers are very fast, their speed is about 15,000-20,000 lines per minute.
Electro-graphic Printer: This printer as a matter a fact writes on special paper using electricity. The Paper Is held between two electrodes. These printers can either use wet process or dry process. The speeds of these printers are fairly high and are about 2000 characters per second. These printers are very reliable as there are very less moving parts.
Electro Static Printer: This printer uses a mechanism, where static electricity is used to create impressions on special paper. He changes attract toner powder to the charged spots, giving the print. This printer uses dot matrix pattern. These are very fast and are capable for plotting graphs etc. The speed is very high i.e. upto 20,000 lines per minute.
Spooling and Printer Buffers: As we have already seen that the speed of the printers is incredibly slow when compared to the processing speed of the computers to which they are connected. Therefore, whenever the process of printing is going on i.e. sending: text to printers, the computer’s CPU is not utilized i.e. we cannot do any other productive processing till printing job is over. This problem can be overcome using any one of the two available approaches, so that while printing is going user can do other processing on the computer. The following are the option available for the above discussed problem.

What is Spooling and Printer buffer?

Spooling: This process allows the processor to shift between processing a user’s activity and controlling the printing process alternatively. But for this approach we need a dedicated block of primary storage, where the text to be printing by he spooler is stored. If the on going process user most of the storage space left may not be sufficient for spooling life. For spooling a special program i.e. software called “spooler program” is used. This is a software solution. So, to overcome the storage space problem, one can adopt second option.
Printer Buffer: The hardware solution for the problem discussed is that printing activity can use the buffer memory. This usually cases an additional storage device which can accept text to be printing, with the same speed as that with which computer sends the text, Then this buffer slowly releases the text, in unison with the speed of the printer to the printer, while the computer performs its other process once the buffer is empty, the CPU fills in the buffer with data which has to be printing and then it diverts its attention to other tasks, meanwhile, the buffer slowly releases data for printing. Thus the problem of waiting till the printing process is completed can be solved by adapting to either of the two options, thus effectively use computer to make our tasks easier and effective.
Plotters: Plotters are those devices which reproduce drawings using pens that are attached to move able arms. Plotters may also use ink-jet approaches. The quality of the plotter’s output is very high. When these plotters are used either the paper is moved or the pen. We can even print in color as the pens are program selectable, and there are several pens which move along with carriage and drum under the control of computer to produce fine pictures.
Shop for Top 10 Printers in India: Online Shopping at Low Price

Define the Meaning of Action Plan In Environmental Science Studies