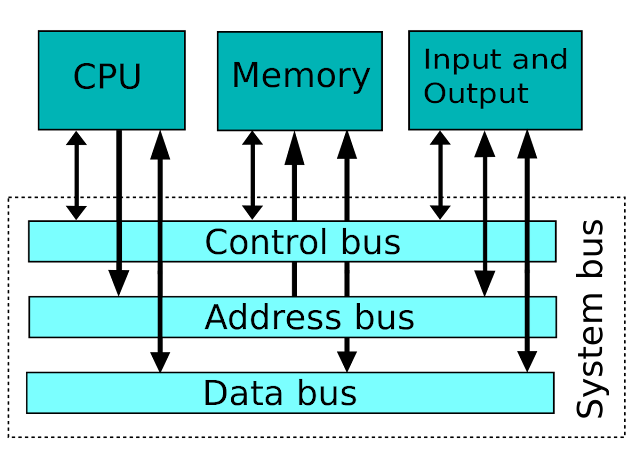 Instruction set: The instruction set of data VAX is usually symmetric with respect to the data type. These instruction sets usually include the following elements: –
Type of operation indicator is used as prefix.
Data type operand, used as suffix.
An indicator that gives number of operands used.
These are instructions for basic operations like arithmetic operations, data transmission, conversion, comparison etc. Instructions for loading and storing multiple registers calling and returning from procedures are also available.
Input and Output: Input and output operations are done by a special device called Input Output controller. Each controller has set of status and data registers, which are used as physical address space.
RISC machines: RISC stands for Reduced Instruction Set Computer. These are machines which have quite simple design. The processors used for personal computers come under these categories. The concept of RISC machines is developed in early 1980’s with a view to simplify the design of the processors with the symbol simplified design resulting in faster and less expansive processor development with much reliable and faster execution of instructions.
In RISC systems, the length of instruction is fixed and standard, with single cycle execution of most instructions. The access to the memory is done by using load and store instructions. The instructions are register to register operations except for load and store operations. RISC systems are composed of quite a large number of general-purpose registers. In these machines, the numbers of machine instructions, instruction formats and addressing models are relatively very small.
This technology is used in desk top computers and minicomputers. This technology aims at reducing costs, get faster in operations. The critics are against RISC technology as they feel that single instructions do not really modern day computing needs. If we look at general characteristics of these machines, the following aspects can be considered.
Memory: RISC machines use 8-bit bytes and byte addressing. A word consists of four bytes, a double word consists eight bytes and there are half words which are formed by two consequent five bytes.
Registers: These machines use quite large number of general purpose registers numbering more than 100. Any program or procedure can use only 32 registers which are represented by r0, e1, r2…..r31. Out of these registers first eight registers can be accessed by all procedures as they are global. Apart from these registers, these machines have registers which are used as program counters, condition code registers and many more control registers.
Formats of Data:There are different data formats supported these machines, for different data types. One can store integers, characters and floating point values. TO store integers 8, 16, 32 or 64 bit binary numbers are used. To represent negative numbers we use 2’s complement. To store characters one byte is used, which is based on 8-bit ASCII code. For representing floating point numbers, there are three different data formats. The formats being 32 bit, 64 bit and 80 bits depending on the precision of the data.
Instruction Formats: The instruction length is fixed and there by increases the speed of the processing. These machines generally use three basic instruction formats for call instructions, branch instructions and three-operand airthematic operation and loading and storing registers.
Modes of addressing: There are quite less addressing modes in these machines providing for efficient implementations. There are about three different modes of addressing which can be immediate mode, register direct and register indirect mode.
Instruction Set: There are about 100 machine instructions only which are mostly register to register operations except the instructions that access memory which are loads and stores. Apart from these instructions, the instruction set contains special purpose instructions to support system software, communication and conditional codes.
Input and Output: In the machines input and output devices are managed and communicated using memory. For every input output device there is a unique address. Input and output operations can be performed using regular instruction set without any special instructions.
Thus, RISC machines which use reduced instructions so that the complexity of the systems is reduced and the speed to enhanced. The cost of the computer also comes down without effecting the efficiency of the computer.
RISC Verses SISC: RISC machines are machines which are relatively cheaper, cost effective, fast and simple organized computers. RISC basically works on the principles of optimizing compilers foxed instructions and addressing modes, single cycle execution, hardware control etc. These machines are basically common sense approach towards computer organisation. But when it comes to SISC, which is based on complex instruction set, where hardware use is quite heavy, which slows down the working of computers. But the argument goes that RISC machines depend a lot on compiler can make RISC machines a good for nothing. Even the single execution cycle implement by RISC machines is not sufficient for carrying on complex instructions and calculations. Both these machines have their advantages and disadvantages.
Design by Mohit Bhardwaj

What is Meant By Booting Process in Computer Systems? Define its Categories