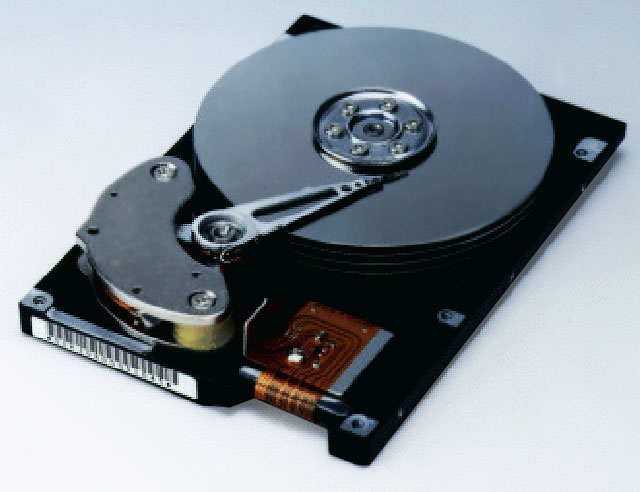 Magnetic disks are very popular means of secondary storage. A magnetic disk is like gramophone record. Magnetic disk is usually made up of plastic like material called Mylar or any metallic platter coated with ferromagnetic materials. The data is stored in the same way as in magnetic tape, as Polarized Magnetic Particles. Here, read /write heads are small electromagnets which are capable to read, write or even erase data stored as magnetic spots. These heads are fastened to an arm in a disk drive, so that they can move quickly and directly to any location on disk to store or retrieve data .The data can accessed randomly from a disk, unlike magnetic tapes where data has to be accessed sequentially. These disks are capable to rotate at very high speeds of about 1800-3600 revolutions per minute. All the magnetic disks are round and are coated with magnetic material. These disks come on various sizes. They are made of different materials which can be plastic or rigid metal. They can have varied storage capacities.
The disk drives are classified into two types based upon the read/write mechanism. They are:
i. Drives with fixed head   ii. Drives with moving head
i) Drives with fixed head: These drives are composed of a set of fixed heads which are equal to number to the tracks. The disk rotates, with fixed head reading or writing the data. The time taken for these operations is about 10-15 milli seconds.
ii) Drives with moving head: These drives have any one head, which is used to read/write onto the disk surface. The head is fixed to moving arms that move in unison with the disk. The time taken for operations of read/write is slightly more than the fixed head as the arm has to move to the position to seek specified track. It takes out 25-100 milliseconds to find an item. The data can be stored on these disks for infinity. They can be erased and reused.
The time taken for accessing the data which is stored on these disks depends on the following two factors.
1. The seek time: It is time taken for positioning read/write head to the track which is required. i.e. where the data required is stored.
2. Latency Time: It is the time is taken for passing the data under the head, i.e., time taken to spin the disk to read complete data.
Working mechanism: Once the data is read by the head of the Disk drive from the Magnetic Disk, it is copied onto the processor for further processing. The transfer rate usually depends on the density with data is stored as well as the speed at which disk rotates.  All the disks are usually round in shape, which are divided into tracks. Data is represented on a disk using the same 9-bit code which is used for storing data onto tapes i.e. EBCDIC code. Each character is stored longitudinally or: the tracks of the disk. We can store records of any length on the disk like tapes. The records can also be blocked to maximize the usages of disk space.

Types of Magnetic disks in Computer

All the magnetic disks are round and are coated with Magnetic Material. These disks come on various sizes. They are made of different materials which can be plastic or rigid metal. They can have varied storage capacities. These magnetic disks can be divided into the following broad categories:
1. Fixed or hard disks   2. Floppy disks
All these disks surfaces are composed on concentric circles called tracks. Data is stored on these tracks. These tracks start from the outer edge of the disk and move inwards toward the center of the disk, without touching it. Each track is associated with a number. The tracks are further divided into sectors.
1. Fixed or hard disks: Fixed or hard disk is usually made from aluminum or other materials of Mylar or any other plastic like material. Hard disk or fixed disk uses hard disk drive for input or output of data i.e. transferring data from and to a hard disk. Usually hard disk is permanently installed in the drive or it may even be –n form of removable cartridge or disk pack which is removable from the drive. The following are some of the commonly used Hard disks types:
i) Winchester Disk: This is a disk which is permanently housed on sealed container, which is free from any contamination. This disk is not removed from the drives usually. Even the read/write heads as well the access mechanisms are also sealed along with the disk they work on. This disk is usually large (about 14 inches). Any high capacity storage units which may be of any size if it sealed along with other devices are called Winchester disks. These disks also come in various sizes like 9-inches, 5-inches etc. These disks are usually in mini and Personal Computing (PC) systems. These disks are coated with special lubricants which enable the head mechanism of the work on the surface without any damages. These disks were introduced as early as 1968 by IBM, but it became popular only after few years. These were firstly used for providing back up to dual 30 MB I.e. 30 mega bytes, standard disks. As the chamber of a Winchester disk is sealed provides a total clean and dust free operating environment, thereby removes the need for preventive maintenance huge volumes of data.
ii) Removable Cartridges or Disk Packs: These are disk devices which use one or more disk cartridges or disk packs of three or more disks of (14-inches metallic disks) mounted on single shaft. These disks are not sealed in contamination free containers. The storage capacity of these cartridges is combined capacity of each disk pack, which ranges between about 5 million to 30 million characters.
Design by Mohit Bhardwaj

Air, Water, Sound And Noise Pollution and Its Control In World

What is Operators? Different types of Operators Used in C++ Language

What is Looping? Looping statements used in c++ language