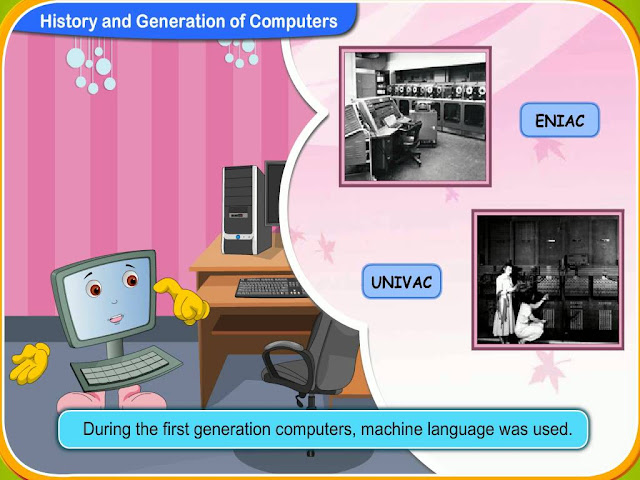 As the computers evolved over generations, each generation has made technological revolution and various changes in the characteristics like:
Speed
Storage capacity
Cost
Reliability
Power Consumption
Portability
Flexibility, etc.
If we look at various generations of computers we can notice various technological evolutions, which made computers more powerful and reliable. These technological evolutions and revolutions made the difference to the world of computing. The following are the technical aspects of each generation, which will pave the way for understanding the technological evolution.
First Generation (1950s):
The general technical features of the computers belonging to this generation are:
a)      The vacuum tubes were used in the circuits of these computers.
b)      The input and output operations were done using Punched Card Technology.
c)       For external storage, magnetic tapes were used.
d)      The machine was capable to do one job at a time, therefore batch processing was adopted.
e)      The operation like setting of switches has to be done by humans.
f)       The language used by these computers was machine language and assembly language.
Example of Computers: UNIVAC_I, IBM 650 etc.
Second Generation (1960s)
With invention of transistors by Bell Telephone Labs, the vacuum tubes of first generation were replaced by transistors. The following were technical features of these computers of second generation:
a)      Transistors were used in the circuits.
b)      The input operations were performed using punched cards and magnetic tapes and for output operations, punched cards and papers were used.
c)       For external storage magnetic tapes were used.
d)      The orientation was towards multiple users i.e. the machine was capable to process multiple tasks concurrently.
e)      For punched card operations only, human intervention is required.
f)       The high level languages like FORTRAN, COBOL, and BASIC etc. were used in the languages by the computer.
Example of Computers: IBM 1400 and 7000 series, General Electric 635 etc.
Third Generation of Computer (1970s)
This generation of computers witnessed major advances and changes in hardware and software capacities. The major technological features of computers of these generations are:
a)      Integrated circuits replaced transistors, In spite of their smaller size they were capable to perform better than transistors.
b)      For data input and output operations monitors and keyboards replaced the punched cards.
c)       For external storage magnetic disks were used.
d)      Sophisticated operating systems, which were capable of handling several jobs concurrently, were used.
e)      More advanced high level languages like PASCAL were used.
Examples of computers: IBM System/360
Fourth Generations Computers (1980s)
This generation witnessed major technical evolution, which had profound impact on computing technology. With the very large scale integration (VLSI) getting developed, microprocessors were created, which revolutionized the computer itself. The following are the technological features of the computes of these generations:
a)      The circuits used VLSI and microprocessors of virtually microscopic, size, which led to drastic cut on the size of computer.
b)      The input output devices were the same monitors, keyboard, printer etc, but with refinement.
c)       Micro computers have evolved.
d)      Magnetic disks were the primary devices used for external storage.
e)      The disks of special software for maintaining large data bases became popular.
f)       The application software for micro computer essentially became popular in this generation.
Example of computers: IBM systems/370, Burroughs B7700 etc.
Fifth Generation (late 1990s)
The computers of this generation use optic fiber technology to handle artificial intelligence. These computers have capacity to think and reason (intelligence being programmed) which can be used to solve problems where human intelligence is required. Thus, a fifth generation’s computers can handle various jobs with a great precision. Expert systems are example of systems implementing artificial Intelligence (AI).
Design by Mohit Bhardwaj

Difference between National parks and Sanctuaries

Classifications of Computers and Different Types of Digital Computers