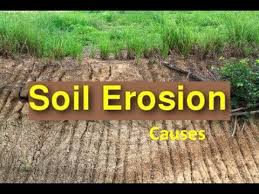 The Soil can be defined as the uppermost weathered layer of the solid crust of earth; it consists of rocks that have been reduced to small fragments and have remains of plants and animals that lived on it and within it. Soil is one of the most important ecological factors as plants depend for the nutrients, water supply and anchorage upon the soil. Soil system is very complex and dynamic, undergoing continuous change.
Due to interaction of various factors influencing the process of pedogenesis, there develop a variety of soil types. The quality of soil depends upon nature of parent matter, other factors such as climate, biological and topographic factors are also responsible for quality of soil. Soils can be identified by reference of their profiles. Soils profile is the sequence and nature of the horizons super imposed one above the other.
Soil Erosion
Soil erosion is the major and only plant life sustaining resource on Earth which continuous the flow of energy on the earth. But over explosion and improper use of this resource by man leads to depletion. This degradation of soil is mainly due to soil erosion and soil pollution. Soil erosion is a natural process and is as well as earth itself. It takes approx. 500-100 years for an inch of the top layer, to build up. Top fertile layer of soil is wasted by several ways. According to Rama Rao “Soil erosion is creeping death of the soil. About 77 million acres of land in U.S.A. has become seriously eroded. When rain begins, the upper layer of soil is skimmed off.
Soil loss is more prevalent in region with high population densities continuous cultivation of same crop is also responsible for soil loss. Soil erosion is the most difficult problem of the world. India has been faced serve selling problems in Bhakra, Rihand and other multipurpose dams.
The loss of crop land soil is Maximum in India, being 18.5% of the total soil at the global level.
There are two main types of soil erosion, which are as follows: a) Normal or Geologic Erosion: This type of soil erosion is very slow and equilibrium between loss and build up is hardly lost, unless there is some major disturbance by a foreign agent. Normal erosion takes place itself without any interference of man. b) Accelerated Soil Erosion: This is serious type of soil erosion caused by interference of an agency like man and animals. This is very rapid type of soil erosion and never keeps with the soil formation.

Various agents of soil erosion are as follows:
Water Erosion: This type of erosion is caused by the action of water, which removes the soil by falling as rain drops, as well as by its surface flow action. Water erosion can be further differentiated into following types: a) Sheets Erosion: Removal of top layer of soil takes place in the form of sheet. b) Rill Erosion: When sheet erosion takes place with full force, the soil surface cut in the form of well-defined finger shaped groom like structure. c) Gully Erosion: This result due to the convergence of several rills towards the step slope, which form together, wider channels of water, known as gullies.
Wind Erosion: Soil erosion by the wind is common in dry region where soil is chiefly sandy and the vegetation is very poor and even absent. Maximum wind erosion in India occurs in Rajasthan. The high velocity winds blow away the soil particles. Wind erosion is of following types: a) Saltation: In low rain fall areas, water evaporates quickly leaving behind salts. The major part of this soil carried by wind in the form of small leaps which is caused by direct pressure of wind. b) Suspension: The wind carries away smallest soil particles into air which moves as fire dust in the air. In this way, soils’ are transported to long distances. c) Surface Creep: the heavier particles of soil are simply pushed along the surface by wind.
Very little effective work has been done in India to overcome the problem of wind and water erosion. To control wind erosion approx. 50 million heaters would cost about 3,000 cores of rupees. Approximately Rs. 600 per hectare is required to vary out necessary a forestation, grassing and protective measures.
Landslide Erosion: In this type of erosion water and gravity both act together. Due to heavy rain, rocks at cliffs come under the gravitational force and finally slip off.
Stream Bank Erosion: During flood, rivers splash their water against the banks and cuts through them. At curves, water strikes with great speed and the bank caves in alone side.
Deforestation and Overgrazing: Overgrazing is a major hazard affecting forests and mountains. Approx. 5.37 million tones of NPK is lost in India by this way of soil erosion under controlled wind erosion due to deforestation leads to decline in the rainfall also.

Floods: Floods are due to heavy rainfalls and deforestation. In upper hilly areas where forests are cut to larger extent, the water does not absorb in the soil which leads to lowing of water in the low lying areas causing floods.
Aridation: Aridation means drying up of lands to the extent that a very few plants or no plants grows on it. This aridity is due to the soil erosion as lower layers of Earth are exposed to atmosphere that is rocky. This aridity leads to desert formation.
Lack of Nutrients: With the soil run-off erosion, the organic matter present on this upper layer is also washed away which leads to minimizing the nutrients value of soil making it unfertile.
There are some other effects which are as follows:
Thinning of soil layer reduces the plant growth, minerals and water. Reduces crop production. Disturbance in air, humidity balance. Loss of underground water. Effects on seasonal and perennial water bodies. Addition of run off soil and mud leads to reduction in atmosphere of water in lakes, ponds. Fish cultivation becomes problematic due to erosion of soil. Alkalinity and seepage increase in the plants. Hydrolytic machines and other water pumpingmachines get rusted due to this mud or soil water.
Design by Mohit Bhardwaj

What do you mean by Process Scheduling in Computer System?