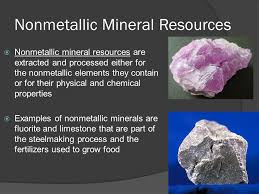 Mica: India is the most important mica producing country in the world. It covers a large group of forming minerals. The principal mica group found in India are Muscovite, Phlogopite and Biotitic-all being hydro silicate. Muscovite mica is found in the Koderma Mica belt in Bihar, Vellore Mica belt in Andhra Pradesh and the Rajasthan Mica Belt. Karnataka, Tamil Nadu, Kerala, Madhya Pradesh, Himachal Pradesh, Assam and West Bengal are also producing mica in considerable amount. Uses: Mica is used as an insulating material in electric industry. Musovite, philogpite splitting are used in making of build-up mica and other insulation products, for heat and electrical insulation. In powder form, mica is used in lubricating oils and Decorative Wallpapers.
Limestone: The sedimentary deposits of lime stone occur with rocks constituting calcium carbonate or double carbonate of magnesium or calcium or both. Phosphorus, sulphur, alumina and silica may also be found. Madhya Pradesh, Andhra Pradesh, Karnataka, Orissa, Gujarat, Rajasthan, Maharashtra are important states bearing limestone deposits. Uses: 75% of limestone is used for manufacturing current. It is also used as lime for using in coal mines, separating silica and aluminum from the ore and producing chemicals such as bleaching powder and soda ash. It refines beet sugar and is used for other purposes in the sugar industry. It plays an important role in the glass, rubber and paper industries.
Magnesite: It is one of the most important ore minerals of magnesium. It is a refractory mineral. About one third of India’s total magnesite reserves are located in Salem district of Tamil Nadu and more than one fourth is found in almora district of Uttaranchal, Karnataka, Bihar and Rajasthan have small reserves. Uses: magnesite is used in powder for flash lights, photography and fireworks. It used in aero plane’s metals as deoxidizer and desulphuriser of Ni and it is also used in refectory materials like furnace lining etc.

Apatite: Apatite and rock phosphate include a group of minerals that occur naturally as native phosphates, apatite or rock phosphates or as fibrous concretions called phosphorite. Apatite deposits mainly occur in the states in Bihar and Andhra Pradesh. Uses: it is highly useful in manufacture of phosphatic containing the phosphate on soluble form. In the manufacture of elemental phosphoric acid. It is also used in the Manufacture of High Phosphorus pig iron for spun pipes and other costing purposes, matches, chemicals and plastics.
Gypsum: Gypsum is a hydrated calcium sulphate. It is usually found in beds or bands in the sedimentary rocks such as limestone, sand stones and slate. The mineral should not be called gypsum, if it contains less than 64.5% of the caso4.2h2o. By weight. Gypsum belongs to the class of mineral deposits called ‘evaporates’. The most important sources of gypsum are found in Jodhpur region of Rajasthan. Other important states where gypsum is found are Tamil Nadu, Uttaranchal, Jammu and Kashmir etc. uses: Gypsum is used as a building material for the manufacture of cement, for the production of plaster and pottery and statutory industries. It is also used as fertilizer and in the paint, rubber and paper industries as well as in manufacture of ‘Plaster of Paris’.

Coal and Lignite: Coal is a combustible, solid stratified rock of organic and mineral matter. Coal is consists of carbon, hydrogen, oxygen, nitrogen and also small amounts of phosphorus and sulphur. The coal occurs as a sedimentary rock in association with carbonaceous shale and sandstone. India is fifth largest producer of coal in the world. Coal is also India’s largest mineral resource. The large coal deposits in India are found in Burdiwan, Bankura, Purulia, Birbhum and Jalpaiguri district of West Bengal. In Bihar, several coal fields found in dhanbad, Hazaribagh, Polamu and Santhal Pargana districts are very promising important coal deposits. Coal deposits are also found in states of Maharashtra, Meghalaya and Assam. Uses: a) Coal is a primary source of heat and thermal power. b) It is used in production of water-gas in metallurgical operations for the purpose of extraction of metals like iron, zinc etc. production of coal, coal tar, coke etc. it is also used to produce different types of varnish and germicides.
Petroleum: It is one of the most important mineral fuels and in complex mixture of hydro-carbon compounds with minor amounts of impurities like nitrogen, sulphur and oxygen. The liquid petroleum is called crude oil, petroleum gas is called natural gas and the semi-solid to solid forms of petroleum are known as asphalt, tar, pitch, bitumen etc. India’s circle oil production in 199697 was 32.9 million tones. India’s most important oil-bearing area in the Eastern part of the Himalaya is Assam. Digboi oilfield is Assam is the biggest oil field in India. The Ankelesh war oil field is kalol, Nawagani and Sanand oil field. In Maharashtra (974) about 115 miles off Bombay in the Arabian Sea, the oil deposit was discovered. Bombay high is the most productive oil field and has a reserve of 5 corer tones of oil. A number of soil fields have been discovered in the states of Tamil Nadu, Andhra Pradesh, Tripura, Punjab, Nagaland and Jammu and Kashmir.
Indian oil industry is divided into 3 segments- a) oil exploration and production b) Refining and marketing c) Petrochemical and downstream units.
Uses: The chief of petroleum is as fuel particularly in transport operations. The petrochemical derivations of petroleum have a wide range of uses in agriculture, industrial and mechanical industries. It is also used for the purpose of generation of heat and power.
Natural Gas: Most of the natural gas is found in association with crude oil. It is obtaining as a by product petroleum refineries. The gas field at Cambay (Gujarat) is the only non-associated source of natural gas. The Morah and Nahorkatiya gas fields in Assam are among the main sources. Uses: Natural gas is used for power generations. The Namrup power station in Assam and the Dhuvaran in Gujarat depend on natural gas sources in their respective states. The gas is also used in the preparation of nitrogenous fertilizers.
Design by Mohit Bhardwaj