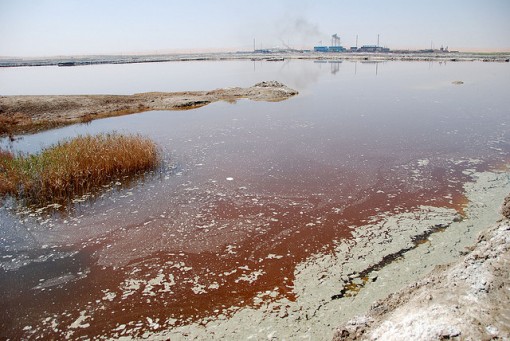 Groundwater Pollution: Ground water is threatened with pollution from seepage pits, refuse dumps, septic tasks, transport and different pollutants. Main sources of groundwater pollution of sewage and other wastes otherwise. This is responsible for cholera, hepatitis, dysentery etc. Industrial Areas Such as a Ludhiana in Punjab, Ambala and Sonipat in Haryana contribute high amount of Nickel, copper, chromium and cyanide to ground waters.
Marine Pollution: The pollutants in sea may become dispersed by turbulence and ocean currents are concentrated in the food chain. Bio accumulation in food chain may result into loss of species diversity. In marine water, the most serious pollutants is oil, particularly when a float on sea. About 285 million gallons of oil are spilled each year into Ocean mostly from transparent tankers. From Indira Dock basin, about 90,000 liters of waste oil was collected in 1984. This Cause damage to marine flora including algae, fish, birds and invert ebrates etc. Detergent which are used up for cleaning of the ocean are also harmful for Marine lite.

Ground Water Pollution in many States in India

Mercury, Lead and Fluoride Pollution: Mercury is a potent hazardous substance, responsible for the micrometer epidemic that causes several deaths in Sweden and Japan. The death occurred due to consumption of Mercury Contaminated fish. Fungicides, algaecides of paper and pulp industry, chloral alkali plants are the main sources of mercury containing effluents. Lead poisoning in common in adults leads toys, plastic pipe, Paints, intercedes of food; beverages are the chief sources of lead poising. Lead pollution is responsible the damage of liver and kidney, free reduction in hemoglobin formation and abnormality in fertility and pregnancy. Chronic lead poisoning is responsible for- gastrointestinal disorders, neuromcular effect (lead lapy) and central nervous systems affects or CMS syndrome which may result to coma and death.
In Haryana and Punjab, consumption of fluoride rich water from well causes dental fluorisis. High fluoride content in Andhra Pradesh cause dental fluorisis. About 22-23 million Indians are affected with fluorisis. Fluorisis is prevalent in the districts of Jodhpur, Jaipur, Bikaner, Udaipur, Ajmer, Barmer in Rajasthan. Prolonged intake of fluoride containing water stiffens the bone joints and responsible for decreased milk production in cattle’s, largeness and they become lethargic.
Pollution in Yamuna: River Yamuna in Delhi has been affected by the dumping of toxic effluents by various industries of Delhi. The Yamuna water is not even fit for irrigation. Misncipal Corporation is responsible for 80% of waste water and Sulferage falling into the river. Sewer lines releases 120 million gallons of waste water. The most serious matter is that only 46.4% of waste water and sullage flowing into the river through 17 open drains is being chemically treated.
Pollution in Ganga: Prime Minister late Smt. Indira Gandhi 1984 took and an initiative and directed Union Government to draw up a plan of action to prevent pollution in River Ganga. Ganga’s water is badly polluted and is not safe for even animals.
Control of Water Pollution: There are two types of pollutants which are responsible for water pollution- bio-degradable and non-degradable or slow degrading pollutants may controlled at source by their treatment for reuse and recycling.  The non-degradable toxic substances can be removed from water by suitable methods. The most scientific way to control water pollution is stabilization of the ecosystem. The basic principles involved at the reduction in waste input, harvesting and removal of biomass, fish management and aeration. Various kinds of wastes which included industrial effluents, sewage etc. may be recycled to beneficial use. Various pollutants present in water body can be removed by appropriate methods such as adsorption electro dialysis, Ion-exchange etc. The NEERI, Nagpur could develop Technology for management of radioactive waste and chemical wastes of Atomic Power Plants etc.
Design by Mohit Bhardwaj

What is the Different Data Transmission Mode in Communication between Computers?

What are Magnetic Disks? Brief Intro of Magnetic disks In Computer