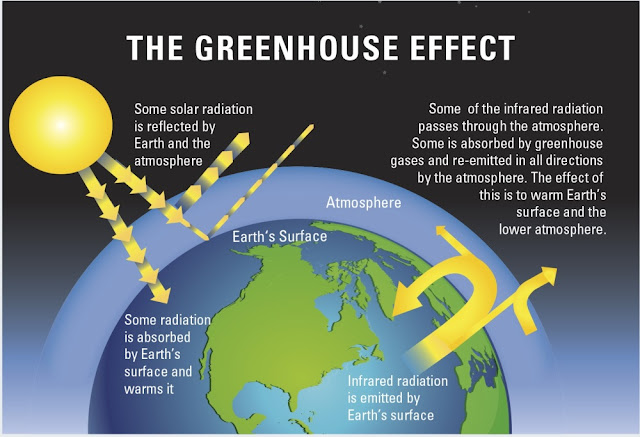 Since carbon dioxide is confined exclusively to the troposphere, its higher concentration may act as a serious pollutant. When there is increase in carbon dioxide concentration, the thick layer of this gas prevents the heat from being repurchased like the glass panels of the greenhouse, allowing that sunlight to filter through but preventing the heat from being re-radiated in outer space. This is called Green-House Effect. The net result is that heating up of the earth atmosphere. Thus increasing carbon dioxide level tends to warm the air in the lower layer of atmosphere on global scale. Carbon dioxide increased earth temperature by 50% while CFC is responsible for another 20% increase. There are other gases also which contribute to Green-house effect. These are Sulphur Dioxide, Nitrogen dioxide, chlorofluorocarbon discharged by industry and Agriculture.
According to some analysts that change in the earth mean temperature will be Apparent by 2050, when the temperature would increase wise 1.5 to 4.5 degree Celsius. Changes will not be the least in the tropics and the most of the poles. So Greenland, Iceland, Norway, Sweden, Finland, Siberia and Alaska will be among the most affected. The Polar icecaps would melt. A Rise of 5 degree would raise the sea level by 5 meters within a few decades. North America would be warmer and drier. The United State Board produce less grains and India’s annual monsoon rains may even cease altogether. The U.N.E.P. has been able to identify, the area that has proved the most disastrous in the greenhouse effect of global warming. If carbon dioxide and other toxic gases discharge by industry are unchecked, it could alter temperature, rainfall and sea level of the earth. N.N.E.P. on the World Environment Day, June 5, 1989 has given a slogan “Global Warming: Global Warming”.

The water pollution can be defined as “the addition of any substance to water or changing of water physical and chemical characteristics in anyway which interferes with it’s used for legitimate purposes. Water contains impurities of these kinds- dissolved as well as suspended. Various water is bad smelling, unfit for drinking and other purposes. They are carrier by many diseases such as cholera, dysentery etc. Sources of Water Pollution: The main sources of water pollution are: Sewage and other wasted, Industrial waste from chemical industries and nuclear power plant, Agriculture discharges.
Sewage and Other Wastage: Sewage includes human excreta, paper, cloth, shop, detergents etc. Due to accumulation of sewage and other wastage in water bodies such as a lakes, ponds, rivers, streams etc., they are not able to recycle them and their self regulatory capabilities is lost. Water becomes unfit for drinking and other domestic uses. Since decomposition of sewage is an aerobic process, accumulation of these water increases, its oxygen requirement (BOD). Detergent forms major part of water pollution. It’s favors luxurious growth of algae which for water blooms. The extensive growth of algae consumers most of the available oxygen from water. The decreases in oxygen level become detrimental to growth of other organism which produces toxins as Strychnine which kills animals including cattle.
Biological Oxygen Demand (BOD): BOD indicates the quality of water waste water. It refers to the amount of dissolved oxygen needed by bacteria in decomposing the organic waste present in water. It is expressed in milligrams of oxygen per liter of water or parts per million (PPM). BOD values or useful in evaluation of self purification capacity of the water body and for possible control measures of pollution. The quantity of oxygen in water along with the BOD indicated by the kind of organism present in water. Thus fish become rare at DO (Dissolved Oxygen) value of 4-5 PPM of water. Further decreases of DO values may lead to increase in anaerobic bacteria.
Design by Mohit Bhardwaj

Major Ecosystems of the World: Natural and Terrestrial Ecosystem