Windows, the popular GUI based Operating System from Microsoft Corporation, offers an excellent platform and environment for a user. The operating system is very user friendly and it has menu and icon driven interface. This operating system has various namely:

Windows 95 and Windows 98 are the operating systems suitable for single user systems, whereas the Windows-NT is multi user operating system. Millennium edition is with Lot of Sophisticated features.
MS-Windows 95/98/2000 is a graphical user interface based operating System by Microsoft Corporation. This comes with simple but useful, word-processing, graphics and many more utilities. Windows 95 has revolutionised the use of computer as or 7 now need not know programming skills, nor need to know anything about the working of a computer, nor remember syntax’s, neither type etc.,
This all was possible by the use of Windows 95/98/2000 Operating System, where one can get his tasks done a mere click of the mouse. Here, everything is graphic based, user is provided with tips where one can easily work on a windows 95/98/2000 based computer.
Windows 95/98/2000 once started gives a screen, on which icons (small”. Graphical objects, representing some functionality) are pasted, which enables the user to choose whichever functionality he needs. One can arrange his desk (i.e. Windows Desktop) as he wishes, can add some icons, can remove some icons, as well have good screen background, which all can be done at a great ease.

The strip at the bottom of the screen is known as task bar, it is used for displaying various current ongoing tasks.

It is a multitasking operating system, which enables a user to do multiple tasks at any given instance of time. It is GUI based, where an end user need not know about the programming part and still work on the system, without any problems. A powerful help facility is provided which will enable a user to sort out his problems without much botheration. Various tips on working with Windows 95/98/2000 are provided for. The file management is very easy process.
Searching for specific files is very easy as search facility is provided, which is very powerful. This is a user friendly operating system.
Administration of the system is very easy and reliable. It comes with various tools and utility to enhance the productivity of the users. It has a powerful task manager, so that one can manage various tasks which are running currently.
When a task is giving problems we can stop and terminate the task. It gives users flexibility to work with multiple windows at the same instance of time, where one can switch between windows as well as move data within and between windows. Windows 95/98/2000 comes with a menu, thereby removing the need for the user to remember various commands and options. Most of the windows come scroll bars, so that one can easily look at the data, by scrolling.
Windows have various dialog boxes, which are popped out as and when needed, so that one is relieved of accidental mistakes. For entertainment, Windows 95/98/2000 comes with Games, which are quite easy to play and are enjoyable, it provides with many types, sizes of fonts, which can be used for the purpose of documentation. It gives a flexibility to use colours, so that the screen appearance can be made as appealing as possible.
And many more such features, which make the windows,  Most Popular Operating System. Multimedia support is provided b/y windows 95/98/2000, if we have multimedia equipment, one can easily connect to the windows 95/98/2000 based system.

Windows 95/98/2000 comes with a flexibility where one can personalize/customize as per his own requirements, may it be screen, may it be options, be it menus or the task bar, anything on windows 95/98/2000 can be customized to suit the specific needs of a user.
Screen Savers: Windows supports screen savers i.e., whenever no one using the system for specific time the windows 95/98/2000 Screen Saver, which is used to hide the work which is ongoing from others, assuming the user has gone for some work.
Plug and play: windows 95/98/2000 gives features, where if any new device is connected to it, one can just plug it and it starts most of the time, if it is standard devices, supported by the operating system. It gives an easiest method for installing various devices, enhancing the performance of the system. Apart from these features Windows 95/98 comes internet compatible and has various features which support Internet Application Development Tools in an efficient manner.
Every function and feature of this operating system is self explanatory, and one can easily work, without any problems. Thus, windows 95/98/2000 comes as a boon to the user, who gets a pleasant, user friendly, Graphic based environment to work in and various functionalities being provided with.

This operating system is being preferred in multi-user environment. This operating system, apart from having all the features of windows 95/98/2000, in terms of ease of use, GUI environment, and flexibility supports networking where many users can connect from terminals, and get the processing done for their requests.
The security also is taken care a lot, where the users may be free of problems of security of their files, as one can ensure that nobody accesses these files, one can re-en share other peripheral devices like printer, which when connected to Windows-NT Server, can be accessed by any terminal on the network.
Windows on the whole provided an appeasing and very user friendly environment where one need not be proficient with programming, at just click of a mouse one can get his tasks done. Thus Windows 95/98/2000/NTprovides on better work environment, hassle free, no need to remember commands etc.

This was the new offering from the Microsoft, which was taken as a successor of all the earlier versions of windows. This is very sophisticated, Complex Operating Systems, with many features, yet it is very user friendly and easy to work with. It came with lot of striking features, which are quite innovating, thereby making this system a popular GUI operating system.
Windows XP has integrated with it lot of notable features, especially its capability to work on multimedia content. The features include ability to record and watch Television shows, listen to music, watch movies, and many other features.
The GUI environment has also been redesigned and revisited to make it more attractive as well as give the user the flexibility to work easily. 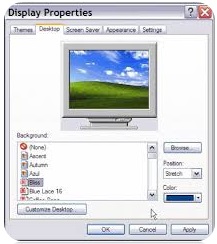 This is the latest offering from the Microsoft, which is talked as a fantastic GUI Environment, which one can ever experience, with the breath taking features and capability to offer varied flexibility and features to suit almost all the needs of the users, this is a very promoting operating system, which has a great potential to offer. This operating system is capable of using the best of the computer’s hardware capacity interface of VISTA, which is known as the “Aero Interface”.
To get the best and fullest experience of windows Vista experience, one has to have lots of memory, a minimum of 64 MD for the graphics, and that must be supporting the complete DirextX 9 Shader Model 2 API.
This interface offers and provides the spectacular visual delight to the users, with its crystal glass like interface elements, the interface elements, which are transparent, and the dialog boxes, which grow in size and seem to approach the user, giving a 3D effect, to the interface.
A detailed description of this operating system is beyond this book, so let is at least have a look at some of the screens, though may not be appealing in print, but great to work with. 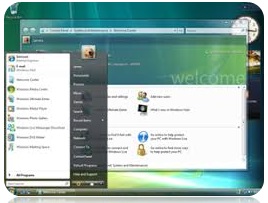 The theme used by the windows Vista, is that of smaller handful user interfaces, like the redesigned start menu layout, a new layout for the windows explorer, icons which are live, etc, all of which give an improved visual quality giving a visual treat, while working, Strong Features for Multitasking, an overall aesthetic sense in which the entire layout is designed and presented to the user.
Working believes, so have a wonderful, fantastic and a pleasant experience working with windows Vista, the visual treat with a potential to do almost anything as an operating system, refining the standards.

What is the Basics of C++ Languages in Computer?

A brief Introduction of Data Representation in Computer Science

Air, Water, Sound And Noise Pollution and Its Control In World