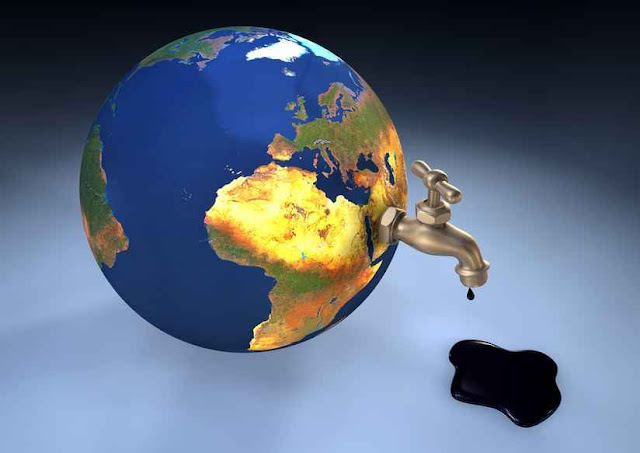 Mineral Resources: Minerals are essential to our industrialized society and daily life. The economic development of a country is influenced by the availability of minerals. Minerals form the base for several large-scale industries. Agriculture too is influenced by the availability f minerals in the form of fertilizers. Due to industrialization, the consumption of minerals has increased tremendously all over the world. The minerals now in short supply (e.g., silver, copper, mercury, tungsten etc.) will probably be exhausted with the next 20 to 100 years. Even in the minerals which are relatively plentiful (e.g., iron and aluminum) will become extremely expensive because of the depletion of large, rich and easily accessible deposits of these metals. Minerals can be metallic e.g., iron, copper, gold, silver etc. or non- metallic e.g., sand, lime, stone, salt, phosphate, dolomite etc.
Extraction (i.e. mining) processing and disposal of minerals have Negative Effects on Environment. Mining not only disturbs and damages the land, but also pollutes the soil, water and air. The land that has been destroyed due to mining is known as derelict land or mine spoil. Such derelict lands can be reclaimed or restored to semi-natural condition by re vegetation to prevent further degradation and also to make the land productive for other purposes. Environmental degradation resulting from mining activity in general can be briefly enumerated as follows: 1) Mining activity causes air pollution (iron ore and lime stone) as dust and gases are released during blasting, drilling, mine haulage and transportation by road and also from waste heaps. 2) Water pollution occurs when atomic elements and other harmful elements are present in the ore/mineral mines effluents. 3) It results in soil erosion, soil modification with dust and salt. 4) Noise and vibration problems occur in mine and adjoining habitat including wild life. 5)  It alternates the land form. 6) It results in deforestation that affects flora and fauna.

Iron Ore: Iron ore is one of the most widely distributed elements of the earth’s crust. Iron rarely occurs in Free State, it enters into the composition of many rocks and minerals. It makes 406 percent of the Earth’s crust. India is seventh largest iron producing country in the world. Indian iron ore has low sulphur content which never goes above 0.6%. Hematite, Magnetic and Limonite are common types of iron in India. Iron ore deposits in India occur as Magnetic Deposits, bedded deposits, residual concentration deposits or as modules and concretion in shapes associated with coal seams. Magnetic deposits are found in Keojhar and Myurbhanj in Orissa, Hassan in Karnataka and Salen in Tamil Nadu. Sedimentary deposits ore found in Orissa, Bihar, Maharashtra, Madhya Pradesh and Karnataka. Residential concentration deposits occur as literate formations in the Eastern Ghats.
Uses of Iron Ore: a) the mixture of iron and other metals are valued for their strength and use in huge powerful machines. b) The domestic demand for iron has gone up with a number of sponge iron, pig iron and mini steel plants, dotty Indian iron and steel map. c) Iron ore is also an important foreign exchanger. Indian exports iron ore in large quantities to countries like Japan and South Korea.
Manganese: India is the third largest producer of manganese ore in the world. The most common minerals are Braunite , pyrolusite, Psilomelane and Mangnite. The country’s most important ore deposits occur in the form of sedimentary stratified metamorphic deposits in the Dharwar system. Uses: Mangenese is important input in the production of ferroalloys.
Chromium: The only mineral ore of chromium is chromites, which is important alloying element in the manufacture of steel. Chromite is oxide of iron and chromium with the theoretical composition of 32% and 68%. Uses: Metallurgical industries in the production of various non-ferrous alloys of chromium and in the form of ferrochrome for manufacturing chrome steel. Refectory industries due to its high resistance against corrosion, high temperature changes and chemically neutral nature. Chemical industries for manufacture of chromium compounds.
Gold: in India, gold occurs both in the native form (as auriferous loads) and as allvial or detrital gold in the sande and gravels of several rivers. The economic gold minerals are native gold (metallic gold), gold amalgam (gold alloyed with silver) and teen rides. The gold deposits in India are found in Karnataka, Andhra Pradesh, Assam, Bihar, M.P. and Tamil Nadu. The kolar gold fields in Karnataka have been the principal source of gold production in India. The other fields that produce gold in large quantities are Hutti Gold Fields in Karnataka and Ramigiri Gold Field in Andhra Pradesh. Uses: Gold is a precious metal and till very recently constituted the international standard of exchange. In alloy state with other metals, it is usually used in ornamentation. The industrial use of gold alloy is in dentistry and in chemical plants, thermo-couples, watches, X-rays equipments, photography and some medicines.
Silver: The ore mineral are stephanite, agenite, proustite and pyrargyrite. Silver is found in the galena ores that may have upto one percent of the metallic minerals. The lead-zinc ores of Zarwar in Rajasthan also yield silver. The Tundoo lead smelter has the capacity to produce some 4,500kg of silver. Silver is also derived as a by-product in the Hutti and Kolar Gold Fields in Karnataka. Uses: Silver is mostly used in ornamentation and in manufacture of alloys with other animals.
Copper ore: Copper is most important non-ferros metal and was the earliest metal used by man. In India copper ores occurs as sulphides. In nature, copper occurs as sulphides (chalpyrite, chalcocite, bornite etc,), oxides (cuprites, tenorite) and carbonates (malachite and azurite). To be economically exploitable, copper ores should contain at least 2.5% of copper. India is deficient in copper ores and thus depends to a large extent on imports. The important copper belt lies in agnigundala in Gunter district of Andhra Pradesh. Singhbhum district of Bihar, Khateri Copper deposits of Rajasthan are other important copper deposits in country. Uses: The copper metal is of great industrial importance due to its high electric conductivity, high ductility and malleability. Thus, it is mostly used in electrical manufacturing. The copper alloys are also used in building, automobiles, aero planes, naval ships, household utensils as we
ll as in metallurgy and paints.
Lead and Zinc: These two metals rarely occur in native state. They generally in combination with other elements. Galena is the one of lead found in India, white sphalerite or zinc blende in the chief ore in zinc. The chief rock types associated with these sulphide ores of lead and zinc are pyrite, slate, dolomite and quartz. The most important of the lead-zinc deposits of economic value are found in the Udaipur district of the Rajashan. Lead-copper ore deposits are found in Gunter district of Andhra Pradesh. The lead-copper-zinc deposits are also found in Gujarat, Rajasthan and Orissa. Uses: Lead is used in construction of accumulators, for lead piping and steel cable covers, as pigments in glass making and in medicines. Zinc is used for coating, galvanizing iron and steel products, in the manufacture of pigments and alloys with other metals (like brass, bronze, germal silver) and in the manufacturing of batteries and electric appliances. It is widely used in textile industry, timber preservation etc.
Bauxite: it is the only ore form which aluminum is extracted. Bauxite is a term for rock rich in hydrous aluminum oxide. Bauxite deposits are found in the plateau bordering Bihar and Madhya Pradesh coastal tracts of Gujarat, Jammu and Kashmir, Western Ghats, Kerala, Tamil Nadu, Maharashtra and Karnataka. Uses: Bauxite is used in the manufacturing of alum, aluminium sulphates and other chemicals. The construction of aero planes, automobiles, electrical appliances etc and it is also used in manufacture of containers, utensils and machinery.
Design by Mohit Bhardwaj

What is Computer Hardware? Input Output Devices and their Functions

What are the Meaning of Personal Management and Also Describe Its Nature?

2 thoughts on “Exhaustible or Non-renewable Resources”