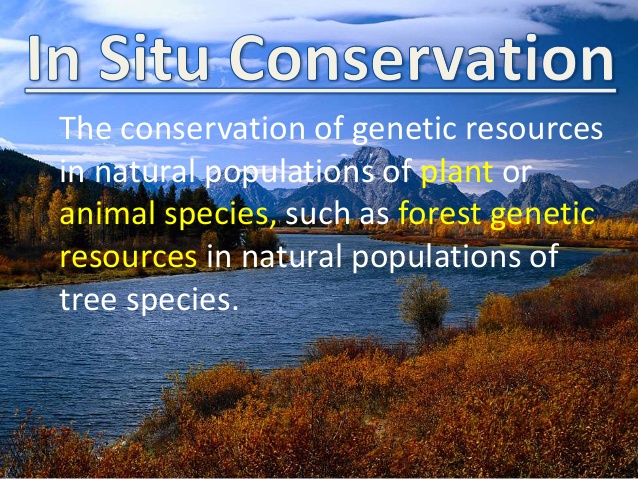 The ex situ conservation strategies include botanical gardens, zoos, conservation stands and gene, pollen, seed, seedling, tissue culture and DNA banks. Seed gene bank are the easiest way to low temperature in cold rooms. Preservation of genetic resources is carried out in field gene banks under the normal growing conditions. In vitro conservation, especially by cryopreservation in liquid nitrogen at a temperature of 196 degree Celsius, is particularly useful for conserving vegetatively propagated crops like potato. Cryopreservation life is the storage of material at the ultra low temperature either by very rapid cooling (used for storage) or by gradual cooling and simultaneous dehydration at low temperature (used for tissue culture). The material can be stored for a long period of time in compact, low maintenance refrigeration units.
Conservation of biological diversity in botanical gardens is already in practice. There are more than 1,500 botanical gardens and arboreta (botanical gardens where specific trees and shrub species are cultivated) in the world a containing more than 80,000 species. Many of these now have seed banks, tissue culture facilities and other ex situ technologies. Similarly, there are more 800 professionally zoos around the world with about 3,000 species of mammals, birds, reptiles and amphibians. Many of these zoos have well development captive breeding programs.
The conservation of wild relatives of crop plants and the off-site conservation of crop varieties or cultures of micro-organisms provides breeders and genetic engineers with a ready source of genetic materials. Plants and animals conserved in botanical gardens, arboreta, zoos and aquaria can be used to restore degraded land, reintroduce species into wild and restock depleted populations.

The earth summit held in 1992 at Rio de Janerio resulted into Conservation on Biodiversity, which came into force 29 December, 1993. The Conversion on biodiversity have three key objectives:
Conservation of biological diversity
Sustainable use of biodiversity and fair and equitable sharing of benefits arising out of the utilization of genetic resources. The World Conservation Union and the world wide Fund for nature (WWF) support projects worldwide to promote conservation and appropriate development of biosphere reserves.

Indian region has contributed significantly to the global wildlife. India is a homeland of 167 cultivated species and 320 wild relatives of crops plants. It is centre of diversity of animal species (mithum, chicken, water buffalo, camel); fruit plants and vegetables (mango, jackfruit, cucurbits), ediable diasoreas, alocassia; species and condiments (cardoman, black pepper genger, ginger, turmeric); an d bamboos, brassica and tree cotton. India also represents a secondary centre of domestication for some animals (horse, goat, sheep, calte, yak and donkey) and plants (tobacco, potato and maize).
The in situ conservation of biodiversity is being carried out through biosphere reserves, national parks, wild life sanctuaries and other protected areas by the Ministry of Environment and Forest. The joint forest management systems involve forest departments and local communicates. This enables the tribal people and local communities to have access to non wood forest products and at the same time protect the forest resources.
The national bureau of plant, animal and fish genetic resources has a number of programs to collect and conserve the germplasm of plants and animals in seed gene banks and field gene banks for in vitro conservation. Botanical and zoological gardens have large collection of plants and animal species in different climate regions of India.
The land races and diverse food and medicinal plants are also being conserved successfully by the tribal people and women working individually or with various non-governmental agencies. The women particularly have an important role in the conservation of agro biodiversity, in India, program is underway to develop a system of community registers of local informed innovations related to the genetic resources, as well as natural resources management in general.

Nitrogen Cycle And Detail Of Carbon Cycle In All Over World