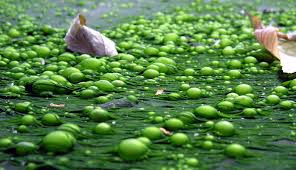 Eutrophication: Due to addition of domestic waste, Phosphates and nitrites etc. from wastes or their  decomposition product in the water bodies, they become rich in nutrients, especially phosphates and nitrites ions. The water body becomes highly productive and this phenomenon is known as eutrophication. The Algae used oxygen at night and may de-oxygenate the water enough to kill the fishes and other animals. The algal mat at water surface may block light from the submerged plants. The algae madie and sink and feed by Oxygen Consuming Bacteria. Decomposition of Blooms also leads to oxygen depletion in water. Thus in poorly de-oxygenated water with higher carbon dioxide levels, fish and other animals begin to die and clean water bodies is turned into a sticking drain. Eutrophication is thus a limiting factor in supply of clean water for drinking, fishing and navigation etc. There are few methods to stop interpretation: The Waste water must be treated before it discharges into the water body. B) Stimulate bacterial multiplication in order to reduce the amount of nitrite solubilized in the water.

Industrial effluents: Industrial waste Lays into Water contain toxic substances. Such as arsenic, cadmium, lead, zinc, copper, mercury, cyanide, besides some salts, acids and alkalies. All these material can prove harmful for Health. They may reach human body directly with contaminated food or indirectly by the plants and other animals. Concentration of the toxic materials increases as a each trophic level of a food chain. This is called bio magnifications of biological concentration. River water may have a very low concentration of DDT, but the carnivorous fish is that river may contain High Concentration of DDT and we unit for eating by men. Mercury discharge into rivers and lakes is changed by bacteria to the neurotoxin from methylemecury. The later is highly poisonous Genesis and may be directly absorbed by fish. About 180 million liters of toxic effluent discharge into the Periyar river everyday by the industrial units in the greater Cochin area. BOD of river has gone up to 16.2 as against the normal value of 5.
Agricultural Discharge: These are basically chemicals used as Fertilizers and pesticides used in Disease Control as compared to developed nations. India has relatively a low use of these Chemicals, thus discharged into water are still low.
Agricultural Fertilizers: Synthetic Chemicals include different types of fertilizers and biocides. These chemicals reach in different water bodies where they determine the natural ecosystem. Chemical fertilizers are made up of only a few minerals. Thus they impede the uptake of other minerals and imbalance the whole mineral pattern of plant body.
Nitrides fertilizers used in soil enter our wells and ponds .This makes water unfit for drinking and also causes diseases. When this water reached into the human body, it combines with hemoglobin of blood to form methanemoglobin, which interferes with the oxygen-carrying capacity of the blood. The diseases producers are called methanemoglobinaemia. Nitrate poisoning is frequent in Rajasthan due to hard and saline water. In Rajasthan, nitrogen trioxide level in water is very high, 800 milligram per liter which is much beyond the permissible of 45 milligrams/1 by WHO. In 1976, there were cases of nitrogen trioxide poisoning of cattle in Nagpur.
Pesticides and biocides: Pesticides are the chemicals used for killing the plants and animal pests. There is wide range of chemicals used as biocides. But the most harmful are those which those which either do not degrade or degrade very slowly in nature. These are highly potent chemicals that enter other Food Chain and then begin to increase in their concentration as successive trophic level in the food chain. Most nations have banned the use of some of these biocides. Some of the most toxic biocides are DDT, BHC, Chlordane, Heptachlor, Methoxychler, aldrin, endrin and PCBs.
There is evidence that such chronic accumulation of pesticides played a role in kidney malfunctioning, excess of amino acids in blood and urine, electroencephalogram abnormalities of brain tissue, blood abnormalities etc.
Industrial Waste: This include two chief pollutants-heat and radioactive substances. These are wasted from power plants- thermal and nuclear. The quantity of waste-water is highest in the thermal power plant in the country which affects the aquatic life in these waster bodies. This is also called Thermal Pollution. The waste water from nuclear power plants also has adverse effect in life.
Design by Mohit Bhardwaj

What Are The Measures To Avoid The Corona Virus? Symptoms Of Corona Virus And Their Solution

What is Operators? Different types of Operators Used in C++ Language

One thought on “Eutrophication, Agricultural Fertilizers and Industrial Waste in India”