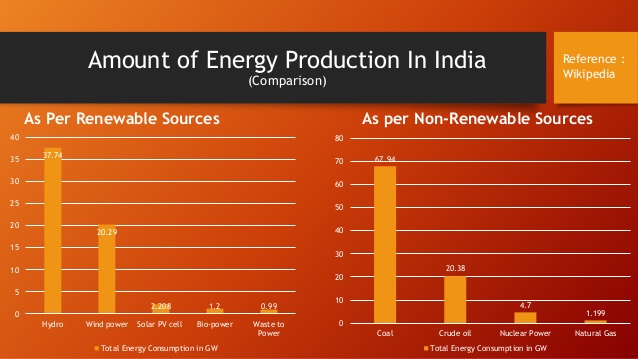 India has a Very complex energy scene which is as follow:

Non Commercial Energy Sources: In India non-commercial energy sources are firewood, agricultural waste and animal dung besides drought-animal and human power. The non-commercial energy sources of energy belong to two categories:
New-renewable sources are solar, wind, geothermal, microhydel etc.
Biomass-based renewable sources like agricultural residues, biogas etc.
Commercial energy sources: The sources of commercial energy are coal, lignite, oil, hydro-electricity and to some extent atomic energy. After independence, the proportion of non-commercial energy is declined progressively and the proportion of commercial energy is increased. According to advisory Board on energy (ABE) the various forms of energy are likely to make following contribution in the Indian by 2004/2005.
Energy source & contribution in India by 2004/2005
The energy consumption in agricultural, industrial and transport sectors is primarily based on electricity, coal and hydrocarbons. The coal does not contribute significantly to houseful energy, though we have large deposits of coal. According to SBE (1985), in rural sectors 84% of lighting is by kerosene and 94.5% cooking is on non-commercial fuel. In urban sectors, lighting is 53% from electricity and 45.2% from kerosene. The biomass-based renewable sources constitute more than 56% of energy consumption. The increased application of new-renewable sources (solar, wind, geothermal etc.) leads not only to reduce consumption of fossil fuels (coal, petroleum and its products; natural gas) but also in reducing environmental degradation.

Coal, mineral oil, natural gases fire wood and nuclear power are the conventional sources of energy.
Coal: Coal including lignite accounts for 60% of the country’s commercial power requirements. Major coal fields in India are Raniganj, East & West Bokaro, Jharia, paren-Kanham, Singrauli, Talchar, Chqarela-Wardha etc. the quality of
Indian coal is rather poor in terms of heat capacity. This poor heat capacity is converted into electricity and gas. That is why many thermal and super thermal power stations are located on the coal fields to produce electric power to feed regional grids. Coal production in India has been increased over 180 million tones in 1888-89. Generally, lignite is a low quality coal put Indian lignite has less ash content than coal.
Coal Producing Countries:
Oil and Natural Gas: Mineral oil is very unevenly distributed over spaces. The area having the possibilities of oil extends over 17.2 lakh sq. km. There is important basins bearing oil starta which can be put in three categories Cambay basin, upper Assam and Bombay Offshore basin are petroferous basins from where commercial production is being taken. kachchh-Saurashtra, Kerala-Konkana and Maharnadi-have geological structures favoring occurrence of petroleum hence these basins are considered to be prospective regions. Till 1947, Assam was the only state where mineral oil was drilled.
Natural gas has emerged as an important source of commercial energy in view of large reserves that have been establishment in the country, particularly in south Basin of West Coast of India. Natural gas is being obtained from couveri offshore, Nada in Cambay Basin and Tanot in Jaisalmer District in Rajasthan. Natural gas is also making significant contribution to household-sector by way of L.P.G. extracted from associated gas. Natural gas can be used as energy source as well as industrial raw material in petrochemical industry. The gas is also used for fertilizer plants.
Thermal Power: Thermal Power plants use coal, petroleum and natural gas to produce thermal electricity. Thermal powers are exhaustible polluting. This is in great demand in industry, agriculture transport and domestic sectors. Big and small both types of power stations are scattered all over the country. Electricity which is produced by these thermal power stations is fed into regional grids. The grid receive electricity produced from all the four sources- coal, water and nuclear.
Firewood: It has observed that about 70% of firewood demand pertains to the rural areas. Apprx. 50 mt. of the firewood become available from into natural forests.
Hydroelectricity: Although electricity can be generated from coal, gas, oil, water and nuclear fuel, gydro-electric power generated from water is the cheapest amongst al the sources. Water energy most conventional renewable energy source. Hilly and highland are suitable for this purpose, where there is continuous flow of water in large amounts falling from high stopes. Hydrp-electric power is a clean and non-polluting souce of energy. The electric power can be transmitted to long sistance through wires and calbes but this form of energy cannot be stroed for future use. Dams are constructed over rivers.
Japan and U.S.A. are the leading countries are production of hydropower. In India, number of multipurpose river valley projects was launched. Bhakra National Project Satluj, Bokaro, Parenet and Tilaiya in Damodar Valley, Hirakud, Rihand, Nagarjun Sagar are the examples of river valley projects.
Nuclear Power: Nuclear Power is obtained form uranium and thorium. Uranium is available in the copper belt of Bihar and the rocks of Aravali range in Rajasthan. The monazite sands on the kerala coasts also contain uranium. Although nuclear power contributed only 2.6% our totral power generation at present, is has vast potential for future development. It requires higher technology to develop nuclear power.
India is one of the six countries i.e. U.S.A., Russia, U.K., France and Canada which has developed the capacity of designing, constructing, commissioning and operating a nuclear power station without any help form outside. Besides electricity, atomic power is also used as fuel for marine vessels, heat generation, for chemical and food processing plants and for space crafts. There are different types of nuclear reactors.
Light Water Reactor (LWR): In this type of reactor, ordinary water is used for cooling and moderation. These are of two types i) boiling water reactor ii) pressurized water reactor.
Heavy Water Reactor: In this type of reactor, heavy liquid sodium is used.
Liquid Metal Fast Breeder Reactor: Here Liquid Sodium is used as coolant.
More than 300 atomic power plants are operating in the world. India is making peaceful power in agricultural, space and medicine. Nuclear Power Corporation is engaged with establishment of nuclear power plants in India.
Design by Mohit Bhardwaj

What is the Meaning of Device Management in Operating System