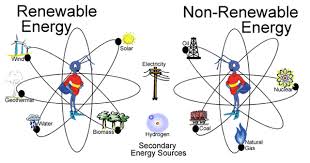 Energy is a basic necessity of all life forms. No one can live without energy on the earth. Energy is required for all metabolic activities of life. So we can say that energy is an important component for the survival of life forms on the earth. Energy is an important input for development. It aims at human welfare covering household, agriculture, transport and industrial complexes. Industrial and agricultural development of any country is only possible with the help of expansion of energy. With vast expansion of industry and agriculture sectors, the available energy sources began to fall in their supply. Besides, there were associated environmental problems with the use of traditional sources.
Before industrial revolution, the common sources of energy were wood, human/animal muscle power, wind energy etc. these energy sources considered eco-friendly as it do not cause any pollution. After industrial revolution, extensive use of fossil fuel (e.g., Coal, oil and natural gases) started that resultant in the environmental pollution. The fossil fuels are presently providing 95% of the commercial energy. The economic development if a country is indicated by the per capita energy consumption. In highly development countries Like U.S.A. per capita energy consumption is 2, 50,000 Kcals. In India, being a development nation, man users only 10,000 kcals on an average.
More than 80% of the total world consumption of the commercial energy is used by development countries and only 20% of the energy is consumed by the developing countries. About 90% of the world’s production of commercial energy comes form conventional sources viz, coal, petroleum and natural gas. Hydroelectric and nuclear power account for only 10%. The figures are given in the table.

Like other natural resources, energy is also renewable and non-renewable.
Renewable Energy Resources: This type of energy resource is available in unlimited amount in
nature and can be renewed over relatively short period of time. These are mostly bio-mass based and includes fire wood obtained form forest petro plants, plant biomass, animal dung, solar energy, wind energy, geothermal and dendrothermal energy etc. these energy resources can be reproduce themselves in nature and can be harvested continuously with the help of proper planning and management.
Non-renewable Energy Resources: Non-renewable energy is available in limited quantity and they are not replenished by nature if exhausted. These develop over a longer period. Due to continuous power, they are likely to be exhausted one day. Coal, mineral oil, nuclear power, natural gas is the examples of non-renewable energy resources. Organic sources of energy such as coal, petroleum, and natural gas are known as fossil fuels.

Meaning of Political And Government Environment Of Business In Brief