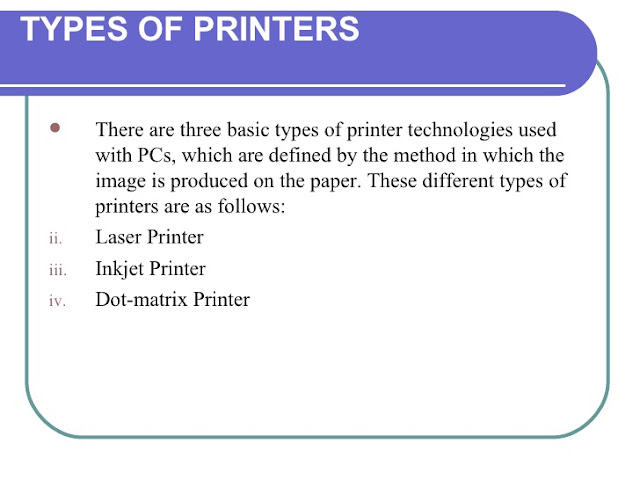 Impact Printers: Impact Printers as seen already are those printers which have direct mechanical contact between printer head and the paper. Impact printers can be generally categorized into following types, depending on the way they print a character.
Solid Font: In these types of printers, a complete character. Like a character on typewriter key, strikes inked surface or a carbon ribbon against paper to produce image of the character on the paper. These solid font characters are usually mounted on any one of the several types of printing heads like ball, wheel, cup etc. The major advantage of the solid font character is that the quality of character images is the best. But the major disadvantages’ that these heads are generally slow.
Dot Matrix: The printer head has print needles, out of which selected needles strike carbon ribbon or inked surface to produce an image. Theses needles can be led to form characters, as the head moves across the paper. The quality characters printed is not as good as solid font but these printers are faster than solid font printers. All the printers print the characters in the ASCII i.e. American Standard for Information interchange character set, which is the standard endorsed by American National Standards Institute (ANSI). This set has about 128 printable and special control characters.
The Impact Printers can be further classified as:

Serial or Character Printers: These printers print individual characters at a time, in a serial order. These printers are relatively faster. Some of the commonly used serial or character inters are:
Dot Matrix Printers: These printers print characters as combination of dots arranged in 5*7 matrix’s. Thus, the same name dot matrix has come to these printers. The speed these printers vary from about 30 to 600 characters per second. The printing of these printers contain vertical array of pins, which fires the selected pins against carbon ribbon or inked surface, while the head moves across the paper to form a pattern of dots representing characters. If the matrix size is varied so the print quality improves.
In those types of printers individual characters are formed by needles which hit against the ribbon selectively forming patterns of dots. At normal reading distance, this pattern of dots blurr together to form semi solid characters. These printers are versatile as their character set can be changed so that different styles graphic symbols can be printed. These serial printers print character by character; these are some parallel printers which have multiple heads which print total line of characters at a time. The print quality of dot matrix is inferior. These printers can print characters in draft quality, standard quality as well near letter quality.
Daisy Wheel Printer: This printer is a solid font type character printer. The quality of print of this printer is good. The name of this printer come form resemblance of the printer head to daisy flower. The printing arms of the printer head look like petals of flower. This printer is very slow, it prints about 60-90 character-per second. The hub rotates continuously, rotating at high speed and the hammer strikes the appropriate in its position. This printer is also bidirectional printer i.e. the printer can be printing while the carriage returns to the far left stop. It also has microprocessor control features making it a smart printer.
Line Printers: These are the printers which print total line at a time, giving the name line printers. These printers use special mechanisms to print one line at a time. They are faster and can print about 1000-5000 lines per minute. These printers also print as dot matrix printers. As dot matrix mechanism is slow, the new technologies like China, Band and drum are being used.

What is the Meaning of Preemptive Scheduling Algorithm?