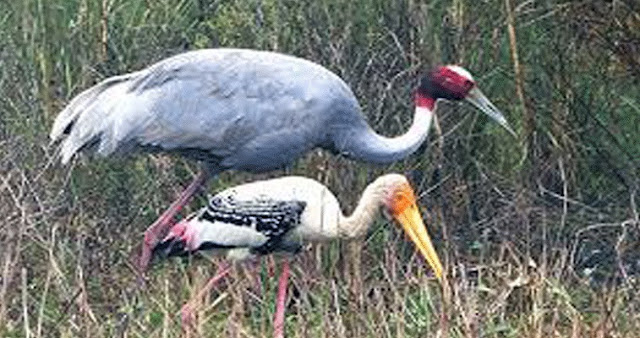 The ecosystems are undergoing change due to pollution, invasive species over exploitation by humans and climate change. Most people are beginning to recognize that diversity at all levels-gene pool, species and biotic community-is important and needs to be conserved.
There is also ethical imperative to stewardship, i.e., we have a moral duty to look after our planet and pass it on in a good health to our future generations. We should not deprive future generations form the economic and aesthetic benefits that they can derive from biodiversity. The decisions we make now, as individual and as a society, will determine the diversity of gases, species and ecosystems that remain in future. We may appreciate the fact that the most effective and efficient mechanism for conserving biodiversity is to prevent further destruction or degradation of habitats by us. We require more knowledge to conserve wild life in reduced space and under increased pressure of human activities. There are two basic of biodiversity conservation, in situ (on site) and ex situ (off site).

The in situ strategies emphasize protection of total ecosystems. The in situ approach includes protection of a group of typical ecosystems through a network of protected areas.
Protected Areas: India is very rich with various bio geographically provinces. It ranges from the cold desert of Ladakh and Spiti to hot desert of the Thar; the temperature forest in the Himalaya to the green tropical rain forests of lowlands. India has abundance of large fresh water bodies such as Wooler and Manasbal lakes in Kashmir, the Chilka in Orissa and the Kolleru Lake in Andhra Pradesh and the rugged and rich coastline and coral reefs of the Deccan. To protect, preserve and propagate this varied nature’s gift the government of India passed the wild life protection act in 1972, under which National Parks and Wild Life Sanctuaries could be crested. Creation of biosphere reserves had also been put into p[practice since 1986.
Protected areas can be defined as “the areas of land/or sea, especially dedicated to the protection and maintenance of biological diversity and of natural and associated cultural resources”. These are managed through legal or other effective means. Examples of protected areas are national parks and wild life sanctuaries. World conservation monitoring centre has recognized 37,000 protected areas around the world. As of September 2002, India has 581 protected areas (89 national parks and 492 wild life sanctuaries), covering 4.7 percent of the land surface, as against 10 percent internationally suggested norm.

A national park is an area which is strictly reserved for the betterment of the wild life and where activities such as cultivation, grazing and forestry or plantation are not permitted and no private ownership right is allowed. Any sort of habitat manipulations a taboo in a national park. There are 89 national parks in India covering the area of 33, 90,088 square kilometers or nearly one percent of the geographical areas. The earliest national parks, the Yellowstone in U.S.A. and the Royal near Sydney. Australia was chosen because of their scenic beauty and recreational values. Many similar areas throughout the world now protect the rare species or wilderness areas. The Jim Corbett National Park was the first national park establishment in India.

In a sanctuary, protection is given only to the fauna and operations such as harvesting of timber, collection of minor forest products and private ownership rights are permitted as long as they do not interfere with well being of the animals. There are presently 492 sanctuaries in India covering over an area of about 1, 07, 31,013 square kilometers or nearly 3.2 percent of the geographical areas.
Design by Mohit Bhardwaj

Energy, Environment and Types of Energy Resources in India

Defining the Meaning of Memory Management in Operating System

What Is Auditing in Accounting? Define Its Definition and Give Difference Between Accounting and Auditing