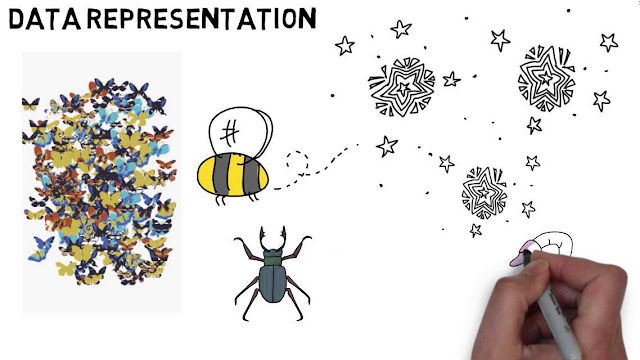 This data has to be converted into electronic pulses and each pulse should be identified with a code. For these reasons, the data is converted into numeric format first, by using worldwide standard called ASCII i.e. American standard code for information interchange, where each and every character, special character and keystrokes have numerical equivalent. Thus using this equivalent, the data can be interchanged into numeric format. For this numeric conversion we use number systems, each number systems has a radix or base, which conversion we user number of digits in that number system. A quick look at number system, gives us the following number systems:

In this system the value of a digit depends on the position or “weights” they occupy. These positions are in the multiples of 10, i.e. the radix of the system.

To overcome the problem of using 10 different pulses for represented 10 digits of the decimal number system, and to make things simpler for computers, Binary number system is used, where into deals with only two digits thereby reducing the complexity. Numbers from one number system can be inter conversion to other number systems.

Binary number system: It is the number system which represents only two digits and has a radix of two (2). The numbers of this system are 0 & 1. The advantage of this numbers system is that, as there are only two distinct digits one can use only two electronic pulses to represent system i.e. 0 and 1 are :
a) Absence of pulses (current) for 0 and
b) Presence of pulse (current) for 1.

Thus the total task of representing data becomes easier. All the data can be coded as combination of these digits. The data from one number system can be converted to binary number system and various combinations of 0’s and 1’s can be used to represent the data.

The major advantage of using this number system are:

The cost of the circuit used in computers decrease to a great extent, as it has to handle only two pulses, which simplifies its design. As the circuit is simple, its reliability increases. All the operations which can be done in decimal system can also be done binary system. Computers identify digital (pulses) which represented either high voltage or low voltage.

Education of Database in Computer Study with Advantages